Religious Education at Mobberley CE primary school allows all our learners to explore and develop a relationship with God and Jesus Christ as well as explore other major world faiths. We follow the Cheshire East Agreed Syllabus 2016 and enhance this with elements of the Chester Diocesan planning which incorporates Understanding Christianity and the 11 Christian theological concepts: Good News, Christian Community, God, Incarnation, Kingdom of God, Forgiveness, Salvation, Resurrection, Discipleship, Holy Spirit and Creation.

Religious education contributes dynamically to children and young people’s education in schools by provoking challenging questions about meaning and purpose in life, beliefs about God, ultimate reality, issues of life and death and issues of right and wrong and what it means to be human. In RE they learn about and from religions and world views in local, national and global contexts, to discover, explore and consider different answers to these questions. They learn to weigh up the value of wisdom from different sources, to develop and express their insights in response, and to agree or disagree respectfully.

Every pupil has a statutory entitlement to Religious Education as it makes a distinctive contribution to a broad and balanced curriculum. Pupils should be given the opportunity to explore the role and significance of religion in society and the important beliefs and values that shape the world today. Religious Education helps pupils understand the religious experience of others and the ways in which it gives adherents a sense of purpose and meaning in their lives.

Discover more about our partners and the resources used within our RE curriculum by following the links below:

To ensure children are making progress within RE, each enquiry has built-in assessment. This task is the formal opportunity for teacher assessment of the children’s knowledge of that religion, depth of critical thinking, and ability to answer the enquiry question. This stand-alone evidence is used in conjunction with other evidence such as records of discussions and annotations from other lessons within the enquiry. As with all subjects, progress for each child will be tracked by the leadership team: RE Whole school assessment TRACKER

See our LONG TERM PLANS BELOW: 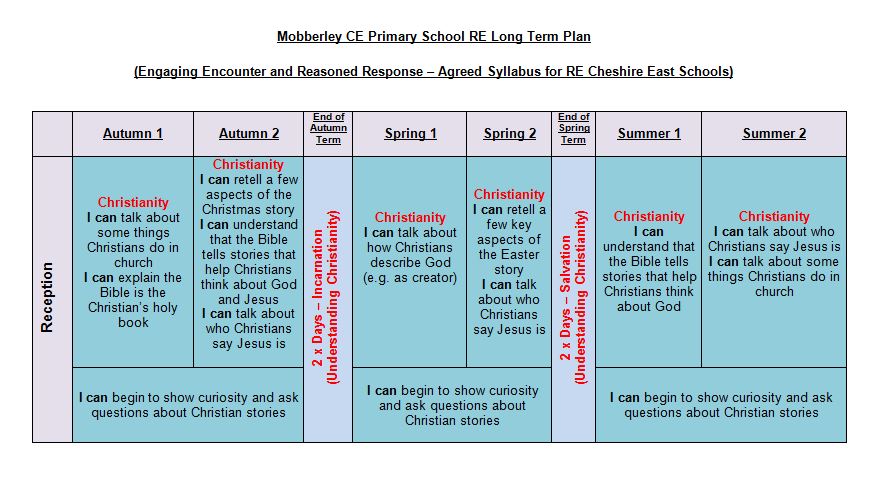 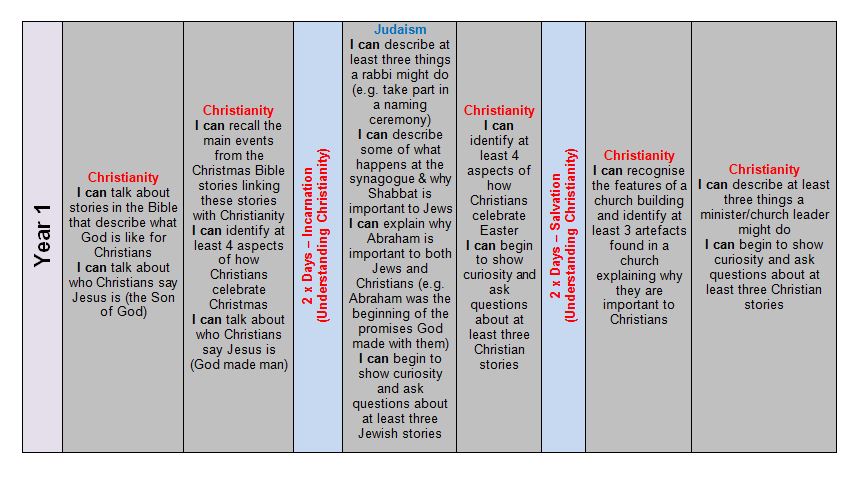 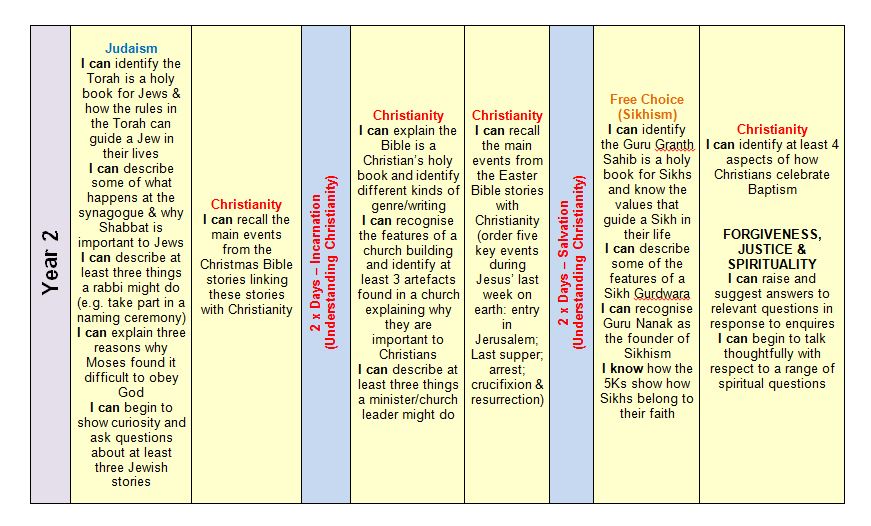 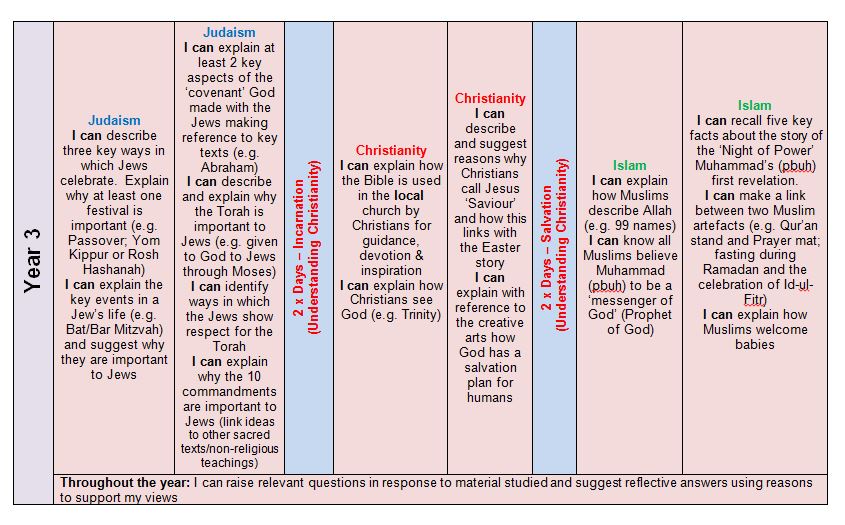 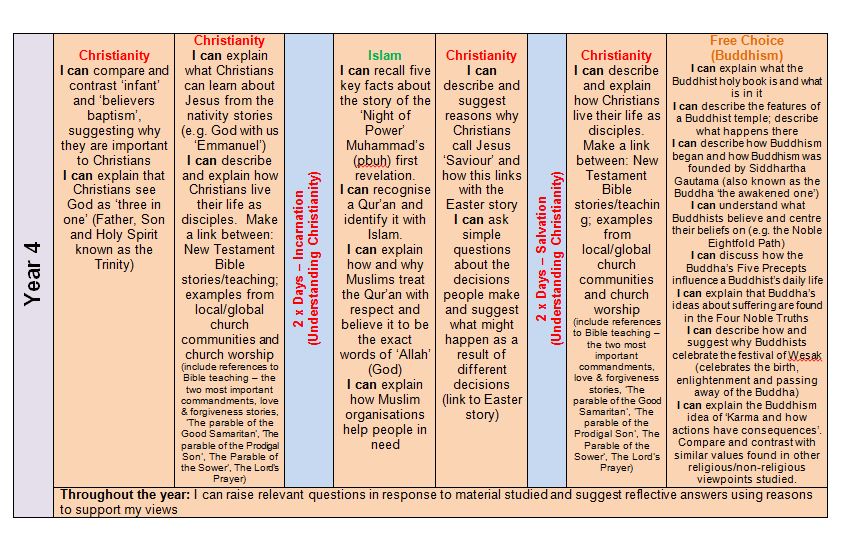 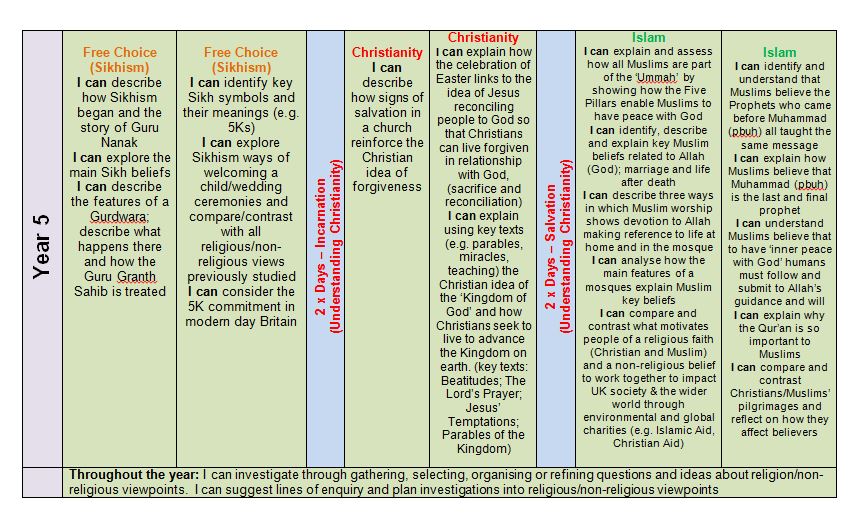 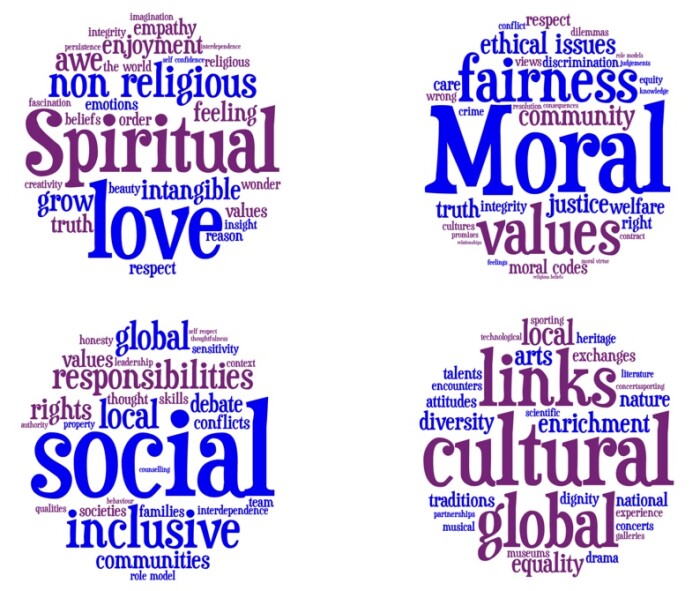 The Spiritual aspect of SMSC is embedded in our lessons, with pupils often being given opportunity to reflect on how the things they have learnt can affect and influences their own lives.

Pupils’ spiritual development is shown by their:

•  Beliefs, religious or otherwise, which inform their perspective on life and their interest in and respect for different people’s feeling and values

•  Sense of enjoyment and fascination in learning about themselves, others and the world around them, including the intangible

•  Use of imagination and creativity in their learning

•  Willingness to reflect on their experiences.

The moral aspect of SMSC asks pupils to consider the moral issues of the topics that are being addressed, such as the role of humans and the environment.

Pupils’ moral development in shown by their:

•  Understanding of the consequences of their actions

•  Interest in investigating, and offered reasoned views about, moral and ethical issues.

Within Religious Education pupils are given the opportunity to develop their social skills through debate, speaking and listening, group work and using a variety of modern media. We also reflect on issues of community cohesion and the affect religion has on individuals.

Pupils’ social development is shown by their:

•  Use of a range of social skills in different contexts, including working and socialising with pupils from different religious, ethnic and socio-economic backgrounds

•  Willingness to participate in a variety of social settings, cooperating will with others and being able to resolve conflicts effectively

•  Interest in and understanding of, the way communities and societies function at a variety of levels.

Pupils’ cultural development is shown by their:

•  Willingness to participate in, and respond to, for example, artistic, musical, sporting, mathematical, technological, scientific and cultural opportunities

•  Interest in exploring, understanding of, and respect for cultural diversity and the extent to which they understand, accept, respect and celebrate diversity, as shown by their attitudes towards different religious, ethnic and socio-economic groups in the local, national and global communities.